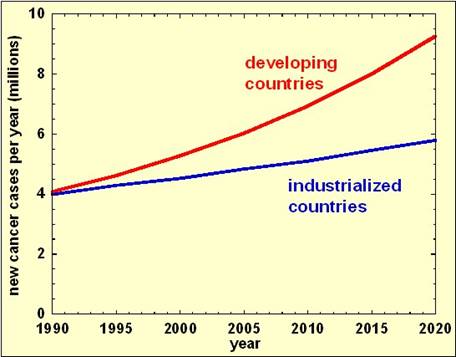 More than 10 million persons are diagnosed with cancer each year (not counting skin cancer). Over half of these cases occur in the developing countries, where the cancer incidence is increasing dramatically.

Nearly 15 million persons will probably be diagnosed with cancer in the year 2015, with almost all of the increase coming from developing countries. Yet the developing world is seriously underserved with the therapies designed to save lives or at least improve their quality of life.

Developing countries make up 85 per cent of the world population, yet they have only about one third of the total radiotherapy facilities. Only about 2,200 teletherapy machines are installed in developing countries—mostly cobalt-60 units—far below the estimated need of over 5,000 units.

The most common cancer in the world is lung cancer; the most common among women is breast cancer. There are significant differences in how cancer strikes people in various parts of the world. In Mumbai (India), lung cancer is the most common cancer among men; whereas in Khon Kaen (Thailand) it is liver cancer. Such variations may be due to smoking, dietary and other social habits, and because people inherit different kinds of genetic mutations from their parents. Some 200,000 women in developing countries die each year from cervical cancer.