Some commercial labelling kits for the preparation of 99mTc-radiopharmaceuticals do contain suitable stabilizers in addition to the substance to be labelled and the stannous salt. . MDP kits usually have an antioxidant such as ascorbic acid, gentisic acid or 4-aminobenzoic acid. (the combinations and proportions of these antioxidants can be seen in the Table describing commercially available MDP labelling kits).

The antioxidants are not involved in the complex formation between reduced Tc atoms and the medronate molecules, but prevent reoxidation of reduced Tc (oxidation state of Tc is 4) to pertechnetate (oxidation state of Tc is 7) during storage of the 99mTc-MDP preparation. Such reoxidation can occur due to the presence of small amounts of oxygen in the eluate or saline solution used for the reconstitution or due to the introduction of air at the moment patient doses are withdrawn from the vial.

Reduced 99mTc may undergo hydrolysis in aqueous solution, and thus reacts with water to form various hydrolysed species, commonly written as 99mTcO2. The exact nature of the hydrolysed species depends on the pH. This hydrolysis competes with the radiolabelling of the chelating molecule of interest (MDP), reducing the radiolabelling efficiency and 99mTcO2 appears as radiochemical impurity.

To ensure the quality of the final radiopharmaceutical is not compromised by the formation of radiochemical impurities, quality control testing is performed, often using the method of Thin Layer Chromatography (TLC). 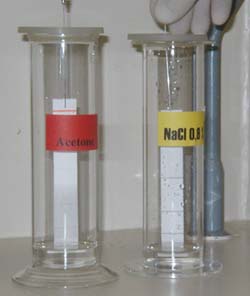 Back to Radiolabelling with99mTc and calculation of doses